Looking to understand the future of ‘clean meat’ and meat alternatives? Wiley takes a dive into this controversial topic to shed light on the evolving industry.

In recent years there has been increasing interest in what is being labelled by its proponents as ‘clean meat’ (also known as cultured meat, in vitro meat, or lab-grown meat). Keeping industry informed on new developments across the food industry is part of Wiley’s future focus as we work to ensure our clients are well positioned in the face of disruption. Wiley neither supports, nor rejects clean meat, our goal is to keep our networks up to date with industry trends and movements that may impact on the future of industry.

What is clean meat?
For more than 2.5 million years humans have been eating meat as part of our diet. Throughout that time this meat has been sourced from animals. The last 10 years has seen research escalate into the production of ‘clean meat’ as an alternative to meat sourced in the traditional manner. This clean meat is created in laboratories from either vegetable product or grown as cultured meat.

The vegetable-based alternatives are largely what one might expect, advanced vegetable patties designed to look, feel and taste, and in some cases even bleed, like meat. These are as close to being effective duplicates as one could conceive of and are likely to surprise the doubters in the space with their effective replication of an animal grown product.

Clean meat is also being used to describe cultured meat products formed using tissue engineering in a laboratory like environment. ‘Tissue engineering’ is the process of taking a small number of cells and placing them in a serum resulting in the cells replicating. These cells are typically embryonic stem cells, adult stem cells or myoblasts. The cells are then placed in a in a bio-reactor for 30 – 60 days to replicate. The exponential nature of this process makes it possible to produce billions or perhaps trillions of cells from a handful, in a very short timeframe and with no redundant tissue produced.

The clean meat industry states their environmental impact in terms of land usage and degradation, water usage and food miles will be a tiny fraction of that of the animal-based meat industry. 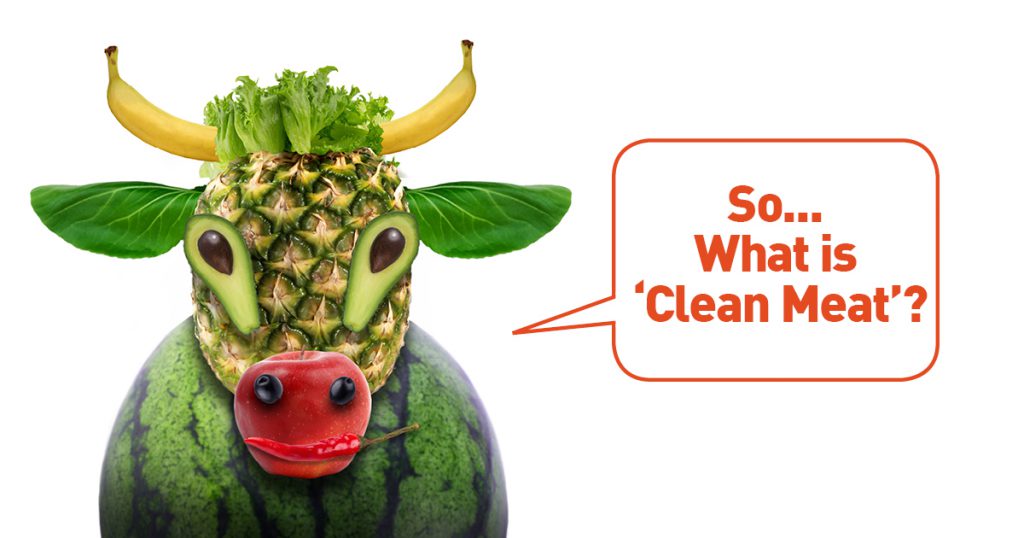 What cuts can clean meat produce?
The nature of how clean meat is produced means that the best that can currently be achieved is the production of what the red meat sector calls ‘trim’. In lay person terms this means minced or ground meat. The reason laboratory product can only produce trim is the model of using stem cells immersed in serum leads to mean cells with no structure. The product doesn’t have blood vessels and other structural elements that are present in animals that give meat the various cuts and the fibrous nature of muscle. This means that clean meat for the foreseeable future will focus on competing in hamburger patties and meat balls. Steak and other cuts require future research breakthroughs before they are a viable product with a path to market.

What impact is clean meat having on the food industry?
Since early 2017 major players in the food space have begun to make investments, some speculative, in clean meat companies. For the most part, the details of these investments are not disclosed but we can be sure they substantial.

This clean meat investment trend by traditional protein companies either, legitimises the future of the clean meat sector or, at a minimum, illustrates that it warrant close monitoring.

The following table shows some of the existing major food companies who have publicly invested in which clean meat startups.

There are two major start-ups in the clean meat space which have received more than $100M USD in funding, these are Just Inc. and Impossible Meat. Memphis Meats has received $20M and Beyond Meat has received $70M USD.

These investments are not to be misconstrued as validation of the notion that clean meat is the future for protein companies. The individual investments should be seen as part of a broader investment strategy from the market players. For context, Tyson Foods has also invested substantially in Tovala, a cook at home ready-meal company with a unique steam oven. This ready-meal approach may compare to conventional cooking as clean meat does to conventional meat. Some people desire the convenience of ready-meals and others don’t. Similarly, some will appreciate the appeal of clean meat while others will not.

Justin Whitmore, Chief Sustainability Officer at Tyson Foods is quoted recently as saying “We continue to invest significantly in our traditional meat business, but also believe in exploring additional opportunities for growth that give consumers more choices.”

What challenges await clean meat as large scale production beckons?
The main challenges facing cultured meat are the cost to scale and the need to lower their retail price to be seen as competitive. Clean meat is a field developing from tissue engineering, which has typically focused on relatively small skin grafts and organ components for the medical field. In a medical context tissue engineering a kilogram of tissue costs $1,000 which is seen as a small price to pay for saving a human life. In tissue culture for food, a kilogram of meat must be cost competitive with traditional meat protein at the checkout.

If this is truly an accurate reflection of the adoption of clean meat, it’s easy to see clean meat could have a substantial impact on the meat market in years to come.

This article is the first in a series of discussions on clean meat that Wiley will share. In the next article we will discuss uptake, market perceptions of clean meat through comparison to other major technological shifts in other markets.